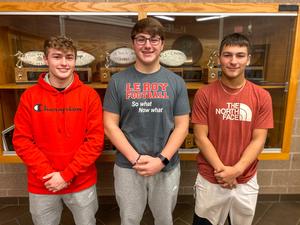 Andrew, who came out for the LeRoy varsity for the first time in this, his senior year, was selected All-State at linebacker as he destroyed the opposition with bone-jarring takedowns which are part and parcel to his scholastic wrestling prowess. For good measure, he rushed for 1,002 yards as a power back for the Knights.  No LeRoy football player has ever rushed for that yardage with zero varsity experience, so it goes without saying that no other LeRoy athlete has ever taken to the gridiron for the first time in his senior year and earned FIRST TEAM All-State status!

Lineman Zach Vanderhoof is an incredible example on how hard work in the off-season leads to success on the football field. Zach who started as a FRESHMAN last season on the varsity, moved to a whole new level this year as he is the ONLY CLASS C SOPHOMORE IN THE ENTIRE STATE OF NY that earned a FIRST TEAM All-State selection!  He is also the first football player from LeRoy, which has been playing football since 1897, to earn a FIRST TEAM All-State selection as a SOPHOMORE!  With two more seasons ahead of him, Zach can possibly become the first gridiron star at LHS to earn 3 FIRST TEAM All-State selections in his career. I like his odds, very much. Just 3 LeRoy players have earned back-to-back FIRST TEAM All-Star status: David Shaughnessy in 1995 and 1996, Zac Dillow in 1995 and 1996, and Don Miller in 2001 and 2002.  Shaughnessy and Miller have been inducted into the Section 5 Football Hall of Fame.

To top it off, Kyler LaCarte, a gifted LeRoy athlete that helped lead the 2019 LeRoy baseball team to a Section 5 crown, was selected as Honorable Mention All-State at quarterback!  This young man was listed as the 3rd string QB on the team at the start of the football season…3rd string!  In the 4th game of the 2019 season, the Knights were struggling with a stout Avon team and Kyler was called into action in the final quarter and he rallied the Men in Black to help them squeeze out a 14-13 win.  Kyler guided the Knights to wins in the final 3 games of the regular season, which included an incredible away game victory over eventual Section 5 champion Letchworth-Warsaw which bolstered the Knights to an undefeated regular season and #1 seed in the Section 5 Class C playoffs.  The team ended the season at 9-1, Section 5 Class C runner-up, and rated #8 in the final season poll among all NY Class C schools.  Kyler was a HUGE factor in the team’s incredible 2019 success.